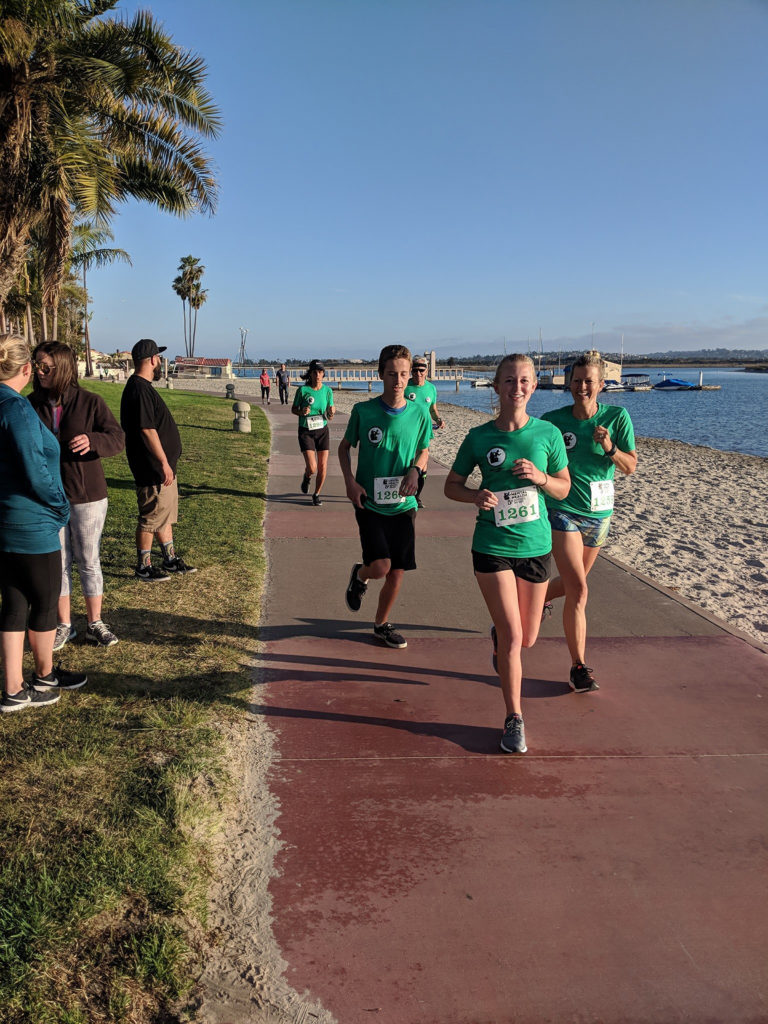 Honolulu, Hawaii: Love Was in the Air as Runners Confronted their Challenges

At Kailua Beach Park, near Honolulu Hawaii, love was in the air as the Bulbul, Myna and Brazilian Cardinals were singing and the sound of crashing waves on the beach harmoniously intertwined. We were joined with our first group of runners and walkers to launch the first of forty-nine more runs to go as part of the Five Fifty Fifty Run/Walk series to raise awareness and support for and reinforce the benefit of exercise for mental health.

I choked when the call to start the race was made by the race director. It has been almost a year in planning and it is really happening! The runners and walkers in their green shirts with the Five Fifty Fifty logos on them gave me the first surge of energy that has never stopped ever since.

Following the run, and since then after every run, we did interviews with individuals who are willing to share their stories. Our first interview was with a woman who has struggled with the stigma associated with her history of anxiety and depression. Another woman who told her story as she had struggled for years to find the care she needs and then took it upon herself, after confronting suicide, to find her own rational solution. Her acceptance of her mental illness has allowed her to move forward.

Anchorage, Alaska: Magical Snow-capped Mountains & the Highest Rate of Suicide in the US

In magical Anchorage, Alaska, we ran at Goose Lake Park. The snow-capped mountains in the distance were stunning. Absolutely stunning! A good-sized group came on board and the stories we heard in their interviews were related to the shortage in mental health services in Alaska, especially after recent state budget cuts. Alaska has one of the highest rate of suicide in the United States and addiction is extremely prevalent, coupled with very inadequate resources to help even those who reach out for help.

The flight to Seattle was during the day and I kept my eyes on the spectacular landscape of the Alaska coast from my window seat. The run was at Magnuson Park on an unusually sunny and glorious day for Seattle. The view of Mount Rainier was the best I have ever seen in the half a dozen times I have been to Seattle. A young woman ran the race because she believed in the benefit of exercise in managing the severe depression she experienced following the death of her grandmother. She has lost fifty pounds which she had gained due to the depression.

Tears were rolling down the cheeks of a young man who came forward with his story. He was the husband and supporter for his wife who suffered from severe depression that started at a very young age. The tears he shed while sharing his experience clearly reflected his passion for the cause and the love for his beautiful young wife.

He admits that it is not easy and that the stress associated with mental illness on any relationship is enormous.

The Laurelhurst Park in Portland, Oregon was in full bloom and the trail could not be more charming as we wound through trails hugged by enormous trees.

Here we had one of our largest crowds. Many young students and nurses, some of whom are considering mental health as a career. The topic of discussion related to how expansion of mental health education and training for nurses and nurse practitioners could enhance the highly needed number of providers.

There is a psychiatrist shortage in the United States. Expanding the role of physician assistants can help fill the gap. Oregon is one of the leading states to give those providers the ability to practice without the need for MD psychiatrist sponsorship.

I learned from an interview here that often employers’ groups chose to limit mental health care coverage to reduce the cost of their plans especially since the overall cost of care has increased so much across the board.

Our next stop was at the Tecolote Shores North Park in "Sun" Diego California. Running along the beach with a fairly large group including my cousin who did her first 5K ever in honor of supporting the cause. California has a great deal of homelessness. In fact, when I visited a month ago, I observed a homeless man pushing a shopping cart on the expressway. In the city of San Diego, there were so many. Mental illness is one of the major contributor to homelessness.

A middle-aged man shared his story of a desperate young man, a friend of his son, who suffered from PTSD and depression who took his life. "I wish I could reach out to him and say that ‘you are not alone.’ I wish I could play the clock back."

When we arrived to Sunset Park in Las Vegas, Nevada, it was about 4 p.m. and the area where the run was scheduled was occupied by a large number of homeless people. It was warm, I mean warm for a Wisconsinite! Luckily, the trail was flat, but it had no shade.

"I am running in honor of my friend, Mickey, who took his life a few month ago,” said one of the runners. “We are both Marines and both of us suffered from PTSD. He could not cope and had too much pride to confront his ‘weakness.’ He got help, but not enough!" the young woman shared.

I interviewed a retired police officer who shared his view for how important to teach and educate officers in addressing individuals with mental health issues, especially those with anger, paranoia, intoxication and addiction problems. It’s good to know that many cities are already giving their officers special training to address that and learn how to diffuse the situations.

Jailing people is not the answer. The solution to addiction is not to incarcerate but to treat.

Phoenix, Arizona: Proud to be a Part of the Five Fifty Fifty Run/Walk for Mental Health

At noon in Phoenix the temperature was 100 degrees and the race was at noon. An amazing group of individuals joined us including many who have recovered or recovering from addictions. They were so proud of the fact that they completed the run. For all, it was their first ever. "Thank you so much for doing this! I am so proud to be a part of it," said one recovering individual. "I just proved to myself that I can!"

Recovery from mental illness, although clearly possible and is done, for it to succeed, much support and counseling need to continue. There is so much shortage of that!

Empowered by the Stories

With every stop that we make, the stories continue and America's struggle with the impact of mental illness on its fabric is becoming clearer to me. I also have become more empowered by those stories for the need to make a change and hopefully make a difference.